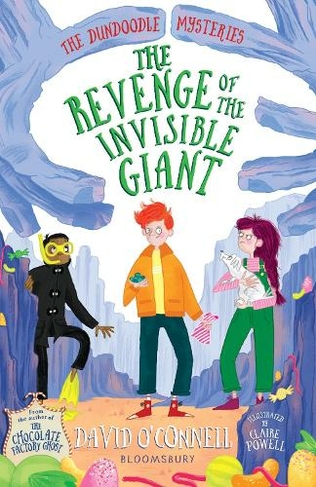 The Revenge of the Invisible Giant: (The Dundoodle Mysteries)

Also available on eBook for £4.67. Click here to purchase from Rakuten Kobo

When a batch of his experimental sweets goes wrong at the McBudge Confectionery Company, Archie needs a distraction. And when he hears about a book of magical wisdom lost in a tunnel beneath the mountains, Archie is determined to find it. It's DEFINITELY so he can be the best magical guardian of Dundoodle that he can be and DEFINITELY NOT so he can turn tree branches into flying surfboards. Only trouble is, the key to open the tunnel was broken into four pieces hundreds of years ago and hidden. Archie, Fliss and Billy set out to find the pieces of the key, but why was the tunnel sealed off in the first place? And what is the deep, sinister, MOUNTAINOUS voice Archie keeps hearing on the wind? David O'Connell, author of The Chocolate Factory Ghost, returns with the latest adventure in his madcap magical mystery series for anyone who loves monsters, puzzles and SWEETS.

David O'Connell is a writer and illustrator from South London. He works mostly in children's books (particularly humorous picture books and young fiction), writing for other illustrators or illustrating for other writers! He likes stories about magic and monsters, especially if they're silly monsters, and loves making comics too. His favourite sweets are fizzy cola bottles.Claire Powell is an illustrator and designer based in London. She has worked with a number of major TV and film brands including Nickelodeon, CBBC and DreamWorks. Her short animation, The Scapegoat, won best short at the British Animation Film Festival in 2015.