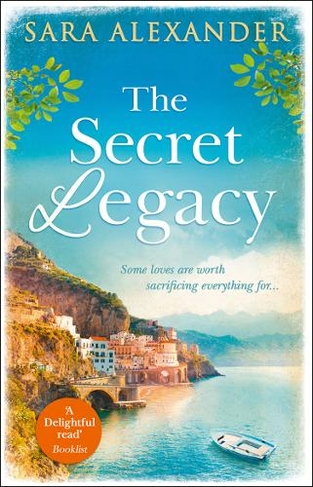 'A delightful read' Booklist Some loves are worth sacrificing everything for . . . Santina is spending her final days at her home, Villa San Vito, in the beautiful Italian town of Positano. As she decides the fate of the magnificent eighteenth century palazzo she must confront the choices that led her here. In 1949, hoping to escape poverty, young Santina becomes housekeeper to a distinguished British major and his creative, impulsive wife, Adeline. When they move to Positano, Santina joins them, raising their daughter as Adeline's mental health declines. With each passing year, Santina becomes more deeply entwined with the family, trying to navigate her complicated feelings for a man who is much more than an employer - while hiding secrets that could shatter the only home she knows . . . Readers love Sara Alexander: 'A riveting read' Online reviewer 'Fabulous' Online reviewer 'A wonderful story' Online reviewer

Sara Alexander attended Hampstead School, London, and went on to graduate from the University of Bristol, with a BA hons in Theatre, Film & TV. She followed on to complete her postgraduate diploma in acting from Drama Studio London. She has worked extensively in the theatre, film and television industries, including roles in much loved productions such as Harry Potter & the Deathly Hallows, Doctor Who, and Franco Zeffirelli's Sparrow. She is based in London.