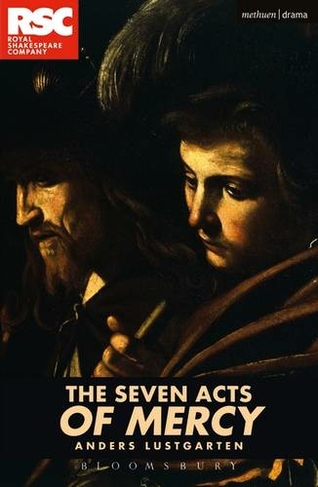 The Seven Acts of Mercy

You have to be tough to be kind. That's what I've learned from you, Granddad. Tough and fearless and strong. So that's what I'm going to be. Naples, 1606. Inside an unfinished church, a painting is emerging from the darkness. The Seven Acts of Mercy is Caravaggio's masterpiece - and his first painting since he killed a man and fled Rome. As the artist works, he is fueled by anger, self-loathing and his driving need to create a work that speaks of compassion in a violent world. Bootle, the present day. A retired dock worker teaches his grandson, as around them a community is disintegrating under the pressure of years of economic and political degradation. With all he has left, a book of great works of art, he tries to open the boy's eyes to the tragedy and beauty of the life he faces. And the boy reciprocates in the only way he knows. Playing out across a gap of 400 years, Anders Lustgarten's visceral play confronts the dangerous necessity of compassion, in a world where it is in short supply. The Seven Acts of Mercy received its world premiere at the Swan Theatre, RSC, on 24 November 2016.

Anders Lustgarten is Pearson Playwright-in-Residence at the Finborough Theatre, where his first two plays, The Insurgents (2007) and Enduring Freedom (2008), were produced. Other work includes The Punishment Stories, (shortlisted for the 2007 Verity Bargate Award), an adaptation of Slawomir Mrozek's The Police (BAC 2007), The Sugar-Coated Bullets of the Bourgeoisie (2010) for the National Theatre Studio and If You Don't Let Us Dream Then We Won't Let You Sleep (Royal Court, 2013). Anders is a political activist, has taught on Death Row, been arrested by the Turkish secret police, and holds a PhD in Chinese politics from the University of California. He also won the inaugural Harold Pinter Playwrights Award with a commission from the Royal Court in 2011.