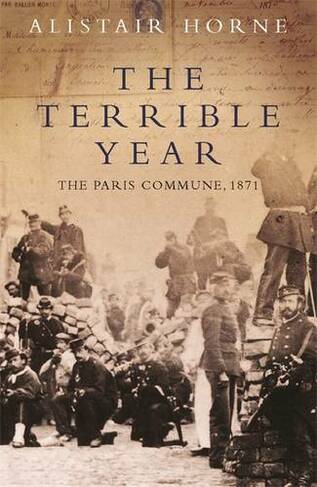 The Terrible Year: The Paris Commune 1871

By Alistair Horne (Author)
Paperback
https://www.whsmith.co.uk/products/the-terrible-year-the-paris-commune-1871/alistair-horne/paperback/9781842127599-12-000.html £7.37 rrp £8.99 Save £1.62 (18%)
GBP
Availability
In Stock
Free Delivery Available When You Spend £25 Or More
Details
Spend £25 on eligible products to receive free standard delivery to home or free next working day click and collect to store
Share

A bestselling historian on a crucial episode in French history. Beneath the glittering facade of Louis-Napoleon's Second Empire there were forces of seething social and political unrest. When France succumbed to the Prussian invaders these forces came to the surface and the Commune took over. It ruled for only a brief seventy days before it died in a holocaust of fire and bloodshed that was far worse than anything perpetrated during France's Great Revolution of 1789, but it left behind an indelible mark which spread far beyond the boundaries of France. 'A brilliant writer' New York Times Book Review 2 Maps

Alistair Horne was educated at Le Rosey, Switzerland, and Jesus College, Cambridge. He ended his war service with the rank of Captain in the Coldstream Guards attached to MI5 in the Middle East. From 1952 to 1955 he worked as a foreign correspondent for the Daily Telegraph. In 1969 he founded the Alistair Horne research fellowship in modern history, St Antony's, Oxford. His numerous books on history and politics have been translated into over ten languages, he was awarded the Hawthornden prize (for THE PRICE OF GLORY) and the Wolfson prize (for A SAVAGE WAR OF PEACE). In 1992 he was awarded the CBE; in 1993 he received the French Legion d'Honneur for his work on French history and a Litt.D. from Cambridge University. He was knighted in 2003 for services to Franco-British relations.