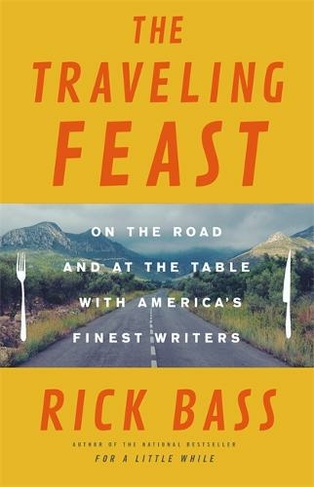 On the Road meets Tuesdays with Morrie in this pilgrimage by "an American classic" (Newsweek) to thank his most important mentors through memorable meals and conversations "Some years later, George Plimpton offered to punch me in the nose," recounts Rick Bass, remembering fondly a conversation with the famed Paris Review editor in his office, in which Plimpton, who had been slugged by Archie Moore, offered to connect Bass to a "hoary genealogy" that would include Ali and Frazier. Lineage has always been important to Bass. Before the punch-that-could-have-been, there was his failed bid to become Eudora Welty's lawn boy, and his first meal with Jim Harrison, during which he could barely bring himself to speak. That supper would eventually inspire this book, Rick's years-long pilgrimage to thank his heroes, and to pass on their legacy of mentorship to the next generation. The poignancy of this journey of thanksgiving is intensified by the place in life at which Bass finds himself. He is nearing sixty, his daughters are now grown, and his wife of more than two decades, who accompanied him on that long-ago dinner with Jim Harrison, has called an end to their marriage. In the wake of this loss, Bass sets out, accompanied by two young writers, to recapture the fire, the hunger, that has faded from his life. The Traveling Feast is a book about meeting one's debts in two directions--sending gratitude to the old exemplars, and a few contemporaries, from Peter Matthiessen to David Sedaris and John Berger to Lorrie Moore, while paying it forward to the next generation of writers, believing in and supporting them as Bass was by his own heroes. Each chapter in this fruitful journey recalls the meeting, the meal, and the history--the writer of the past and of the now. From the disastrous pecan tart to the illegally transported elk meat to the photo op gone awry are many resonant moments. What emerges is a guide not only to writing well but to living well, to sucking out all the marrow of life, in Thoreau's immortal phrase. The Traveling Feast is a chronicling of the old ways, a cross-continent pilgrimage to show gratitude for a legacy of American literature and the writers who made it.

Rick Bass, winner of the Story Prize for his collection For A Little While and a National Book Critics Circle Award finalist for his memoir Why I Came West, was born and raised in Texas, worked as a petroleum geologist in Mississippi, and has lived in Montana's Yaak Valley for almost three decades. His short fiction, which has appeared in The New Yorker, The Atlantic, Esquire, and The Paris Review, as well as numerous times in Best American Short Stories, has earned him multiple O. Henry Awards and Pushcart Prizes as well as NEA and Guggenheim fellowships.