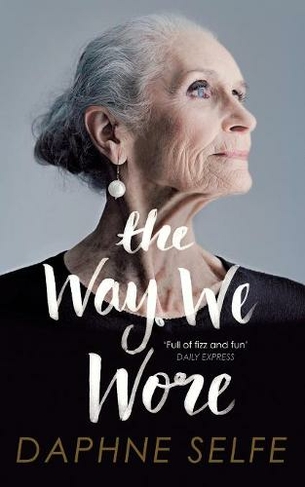 The Way We Wore: A Life in Clothes

Daphne Selfe has been photographed by Mario Testino, Nick Knight and David Bailey. She has modelled for Dolce and Gabbana, Red or Dead and high-street chains such as TK Maxx, and regularly appears in newspaper fashion pages and glossy magazines. She is one of Britain's most in-demand supermodels and has worked non-stop for almost twenty years. But what makes her really rather extraordinary is that she is now in her late eighties. Daphne grew up in an age when dresses were lovingly run up for you by your mother, when needlework for even the most basic outfit was an art form, and when a new Simplicity Pattern was almost more exciting than a new dance tune. Perhaps as a result, she has had a lifelong love affair with clothes and fashion. The Way We Wore is a heart-warming account of that love affair, taking readers from the organdie party frocks of a 1930s childhood to the pages of Vogue. In it, Daphne shares a wealth of anecdotes from her peripatetic childhood, following her teacher father from school to school, from her modelling career, which began as a department store house model, and from her long and happy marriage. The result is a vivid and inspiring memoir from a woman who has always embraced life and who continues to do so in her ninth decade with as much zest as in her first. 38 photographs

Born in 1928, Daphne Selfe grew up in London and the Home Counties, before being sent to boarding school during the Second World War. Just after her twenty-first birthday she won a local magazine cover-girl competition and joined the Gaby Young Agency in London, where she trained to be a model. She has been an artist's model, a department-store model and a commercial model, appearing in advertisements for anything from clothes to breakfast cereal to gin. Happily married for many years to Jim Smith, who worked in theatre and television production, Daphne stopped modelling and moved to Hertfordshire, where she still lives, to bring up their three children. But when her husband died after a long illness, she was suddenly rediscovered - at the age of seventy. She has been working continuously ever since.