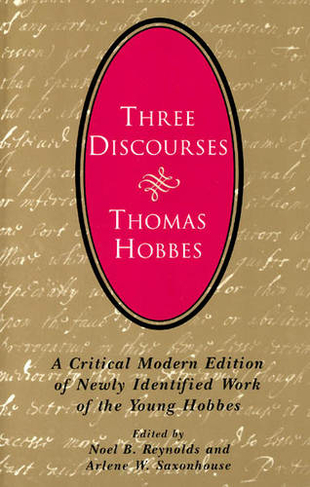 The three discourses presented here are now confirmed to have been written by the young Thomas Hobbes. Their contents may well lead to a resolution of the long-standing controversy surrounding Hobbes's early influences and the subsequent development of his thought. The volume begins with the recent history of the discourses, first published as part of the anonymous 17th-century work, "Horae Subsecivae". The editors present the complete texts of the discourse with full annotations and modernized spellings. These are followed by an essay analyzing the pieces' significance for Hobbes's intellectual development and modern political thought more generally. The discourses provide the strongest evidence to date for the profound influences of Bacon and Machiavelli on the young Hobbes, and contribute to the debated impact of the scientific method on his thought. The book also contains both introductory and in-depth explanations of statistical "wordprinting." 3 line drawings, 1 table