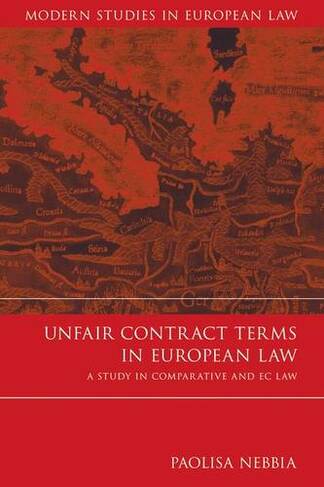 The book examines Directive 93/13 on Unfair Terms in Consumer Contracts and its implementation with a twofold aim: first, to understand the extent to which the Directive has influenced and will influence fundamental notions and principles of contract law in the domestic legal systems of the Member States; second, it examines the extent to which the domestic legal traditions of the Member States have influenced the process of drafting of the Directive and, more importantly, will affect the way that the Directive is interpreted and applied in national courts. The focus is mainly on English law (including the 2005 Unfair Terms in Contracts Bill) and on Italian law, but frequent references are made to the French and the German systems. At the same time, the book has a broader, more 'European' concern, in that it aims to distill from the existing Community acquis and from the history and rationale of Directive 93/13 notions and concepts that could guide its interpretation. It is well known that Community law uses terminology which is peculiar to it, and that legal concepts do not necessarily have the same meaning in EC law and in the law of the various Member States: every provision of Community law must be placed in its context and interpreted in the light of its own objectives and rationale, and of the objectives and rationale of Community law as a whole. In this respect, this book aims to identify the contours and features of the emerging European legal tradition, and to assess the impact that this may have on the domestic traditions. black & white illustrations

Paolisa Nebbia is a Fellow and Tutor in Law of St Hilda's College, Oxford.