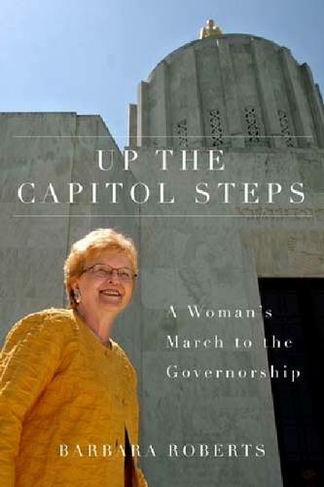 Up the Capitol Steps: A Woman's March to the Governorship

"Up the Capitol Steps" is a personal and political memoir by Oregon's first (and only) woman governor, one of only 34 women who have served as state chief executives in the history of the United States. Barbara Roberts offers a behind-the-scenes glimpse of a woman's life in politics and aims to "demystify" leadership by telling the story of her own unlikely rise to power. The mother of an autistic child before the advent of special education, Roberts began her life in public service as an advocate for the rights of children with disabilities. She documents her expanding political career from school board member to legislator to Secretary of State and finally, Governor. In this gripping and poignant memoir, hotly contested elections and tough policy decisions are interspersed with intimate details of personal ups and downs. Throughout, Roberts reveals the warmth and humor that show the "real" person behind the politician. Only the third published memoir by a woman head-of-state, Up the Capitol Steps is "a very significant contribution to Oregon history, the history of women in politics, and especially the history of women governors," according to series editor Melody Rose. Roberts' autobiography captures a period of our nation's political history and a view of women's expanding role in government that will bring new understanding to the term, "social revolution."