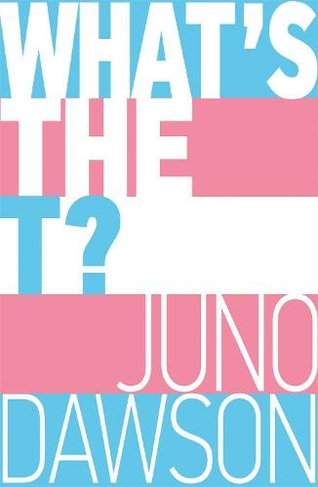 What's the T?: The no-nonsense guide to being trans and/or non-binary for teens

Discover what it means to be a young transgender or non-binary person in the twenty-first century in this frank and funny guide for 14+ teens, from the author of This Book is Gay. In What's the T?, Stonewall ambassador, bestselling trans author and former PSHE teacher Juno Dawson defines a myriad of labels and identities and offers uncensored advice on coming out, sex and relationships with her trademark humour and lightness of touch. Juno has also invited her trans and non-binary friends to make contributions, ensuring this inclusive book reflects as many experiences as possible, and features the likes of Travis Alabanza and Jay Hulme. The companion title to the groundbreaking This Book Is Gay, What's the T? tackles the complex realities of growing up trans with honesty and humour, and is joyfully illustrated by gender non-conforming artist Soofiya.

Juno Dawson (Author) Juno Dawson grew up in West Yorkshire, writing imaginary episodes of DOCTOR WHO. She later turned her talent to journalism, interviewing bands before writing for a Brighton newspaper. Until recently, Juno worked as a teacher, specialising in PSHE. She is most proud of her work surrounding anti-bullying and family diversity. In 2014 she became a School Role Model for the charity STONEWALL. In 2015, Juno announced her intention to undergo gender transition and live as a woman.Visit Juno's website at www.junodawson.comSoofiya (Illustrator) Soofiya's illustration and design work is centred on commentary on gender, race, politics and bodies. They speak, teach and lead workshops across the UK in museums, galleries, schools and universities. Their work has been featured in the likes of the Guardian, the Independent and Metro, and has been showcased at the Tate Modern.